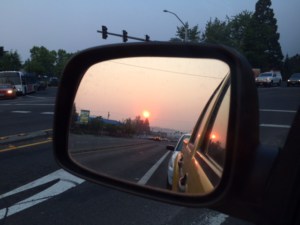 With August coming to a close, it feels like summer is also coming to a close.  But not until Sept 21st.   September often gives us plenty of heat to either enjoy or combat, depending on your internal thermometer.   The photo was taken out of my side view mirror, of a beautiful, hot, summer morning sunrise. (I was at a stopped at a stop light!)   This blog looks at Traditional Chinese Medicine and Summer relationships of health.

According to the Julian calendar, the official summer season starts June 21st and runs through Sept 21st.   With longer days in the summer which allows plants to grow the fruit that requires longer and warmer sun exposure.   Likewise, the extra hours of daylight give us time to be outside enjoying the abundance that the summer brings.

The Element of Summer: Fire

In Traditional Chinese Medicine, the element that is associated with summer is Fire. It has the power to give light, and to illuminate our inner being as well as our external world. Because the power of Fire is felt strongest in summer, it can be the best time for you to focus on regaining the energy we use during the colder months of winter and spring.

Summer activities can sometimes make us so busy that we forget about our relaxation and meditative time.  Thus, make sure to find a balance between action and being. Balance between social events and time to be in your garden, or relax in your hammock. And allow the earth to nourish you and recharge your battery pack.

Fire Element in and out of Balance

Symptoms associated with imbalances in the Fire element include the following:

In Western medicine, the heart is considered the center of the circulatory system. Thus, it’s primary function is to pump blood through the body, and control the flow of the blood.

In contrast, according to the ancient text, The Yellow Emperorʼs Classic of Internal Medicine,  “The heart is the sovereign of all organs and represents the consciousness of one’s being. It is responsible for intelligence, wisdom, and spiritual transformation.”

In Traditional Chinese Medicine, the Heart (the yin organ of Fire) is the supreme monarch, and is supported by three other organs associated with Fire; first, the Pericardium, second, the Small Intestine, and third, the Triple Warmer.

(the Heart’s paired Yang organ): In western medicine the small intestine’s function is to support digestion, assimilation, and elimination. In TCM, the small intestine is said “to separate the pure from the impure.” Physically, it separates the pure nutrients from our food and drink, and effectively eliminates the waste. Metaphorically, it is said to separate what is supportive of us, thus allowing for discrimination in our relationships.