Breaking down the Mystery about Acupuncture Needles 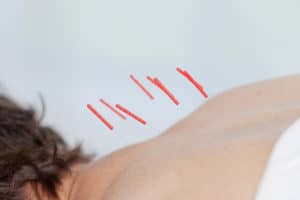 For many people coming in for acupuncture for the first time, the thing that creates the most fear for them are the needles.  They want to know, Do Acupuncture Needles Hurt?   The word “needle” alone brings to mind ideations of pain and doctor visits that can discourage people from wanting to try acupuncture. However, the needles used in acupuncture are nothing like the syringes used at the doctor’s office. Acupuncture needs are very thin, and the depth of their penetration depends on what health concern the acupuncturist is treating. In fact, acupuncture needles come in several different thicknesses and lengths.  Some of the needles are only the size of one to two hairs! All of the different widths and lengths are used varyingly based on the condition being treated. Once people are shown the actual acupuncture needles, most of the time they are surprised at how thin they are.

The first acupuncture needles in ancient China were first made of simple materials like stone or animal bone. Though those needles may not have been as refined or painless as contemporary needles, their appearance between 10,000 and 4000 years ago shows how long acupuncturists have been preforming their practice. As the practice evolved, the ancient Chinese moved toward needles made out of metals like iron, steel, gold and silver. Each type of metal was perceived as having different effects on Qi and were used for treating different health conditions.

Acupuncture needles come in many various gauges and lengths. Usually, the thinner the gauge, the less the patient will feel the needles. However, thinner needles are also more flexible, and the acupuncturist must know exactly how to penetrate them into the body without bending the needle.  Thicker needles usually derive a stronger stimulation during the healing process.

Many acupuncturists have their own preferences for the gauge they like to use, but will also use different size of gauges depending on the patient and the condition being treated. If a patient has a fear of needles, the acupuncturist can use a smaller needle during treatment. Most acupuncturists keep a variety of needle sizes and can easily use a thinner variety at request.

Here is a chart of some of the needles that acupuncturists may have:

Length in MM    Length in Inches

As you can see, acupuncture needles come in many different lengths and gauges and are not at all like syringes. They are very thin, virtually painless.   The longer needles are only used on more fleshy parts of the body that can sustain the length. And as always, modern acupuncture needles are sterile, one use only, and disposable.  This remove any risk of transferring bodily substances between patients. So if you’re still afraid of the needles, and you wonder Do Acupuncture needles hurt?   Talk to a Portland acupuncturist to soothe your fears.  You can always ask for smaller needles if you are really nervous about the idea of needles.