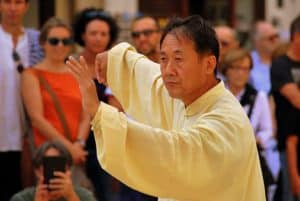 In the practice of acupuncture, there is much talk about Qi.  Of circulating it throughout the body balancing it.  And then, treating key spots where Qi energy has been stagnated. But what is Qi, exactly,  and what role does this enigmatic force play in tradition Chinese medicine?

In the realm of Chinese medicine, Qi is the quintessential essence that forms the foundation of all living things.  And  it can be considered synonymous to “natural energy” or “life force.” It is described as permeating everything, linking all things together as a single functioning unit. Many cultures around the world have described concepts similar to Qi, and it can be likened to the Western notion of humours or the Hindu yogic concept of prana. Qi embraces all manifestations of energy, from the material to the immaterial, and is always in a state of flux. A healthy and happy person is one whose Qi is moving dynamically and in balance.   Whereas,  imbalance or stagnation leads to disease.

Yin and Yang energies are considered essential to the flow of Qi.  They are also are used to describe the relative contrasting qualities of Qi.  While continuously changing, yin and yang are endlessly adjusting and transforming into one another, creating fluidity and balance. When the yin and yang aspects of Qi are in harmony, then one experiences health, wellbeing, and contentment. Because Qi is always in flux, with its yin and yang qualities always shifting, it is important to remain flexible to these changes in order to maintain harmony and wellbeing.

By not adapting, disharmony can follow, bringing with it illness, disease, and suffering. Disharmony is described as fitting into one of two categories, deficiency and excess. Either we receive an insufficient amount of that which sustains and nourishes us, such as food, shelter, and social support.  Or we receive too much of the things that are deleterious such as excessive elemental exposure, environmental toxins, and emotions.

Qi is considered one of the main roots of traditional Chinese medicine (TCM).  Thus the system itself develops upon many of the key concepts of Qi. For example, everything is interconnected and interdependent. Just as all parts of the universe must be in balance for the universe to be in balance holistically.  So is the case with the human body. Disturbance in one area of the body eventually disrupts the harmonious functionality of another. In TCM, Qi refers both to the necessary substances that sustain the body for it’s activities, such as water and air. But also to the physiological functions of the body. TCM seeks to best maintain harmony between the yin and yang qualities of Qi within the body.  And it also seeks to continue the healthy circulation of Qi.

How we obtain Qi

The Qi of the human body is imbibed through two different means.  Initially, through the internal energy we inherit from birth called Yuan Qi, or ancestral Qi.  After that, through the food and air that is taken in from the natural world called Hou Tian Qi, or post-natal Qi.

Within the body, Qi is said to have the following functions:

Being the essence of vitality, Qi stimulates growth and development and promotes the physiological functions of each part of the body.

Qi is a main source of heat for the human body and helps it maintain its temperature.

There are two aspects to this action. The first is guarding the body from pollutants and exopathogens. The other is combating invading pollutants that would harm the body.

Qi commands and controls the liquid substances and organs, transporting and distributing as necessary. It keeps blood circulating within, and facilitates and adjusts the secretion and excretion of bodily fluids.

Qi transforms energy and material as is necessary. Qi maintains metabolism, energy expenditure, and the transformation of fluids and substance to maintain this process, turning food into energy and passing depleted material through excretion.

When the Qi of the body is out of balance or becomes stagnated, that is when we start to experience health issues. This is where acupuncture plays a fundamental role. Acupuncture treats the circulation of Qi through specific meridian points on the body. By needling the specific points necessary, circulation of Qi can flow and the excess of either yin or yang energies can be released. Acupuncture restores balance to the body through its treatment of bodily Qi, promoting healing and health to return. If you are experiencing pains or health concerns, then it might be your body’s way of telling you that something is out of balance.  RiverWest Acupuncture in Portland, OR can treat the Qi energy within your body, and help to bring healing and relief back into your life.