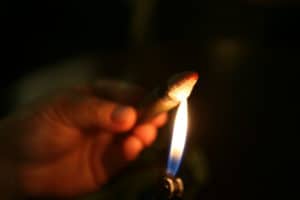 I’m hearing a lot of coughing as patients come into the clinic.  Moxibustion or Moxa is a traditional Chinese medicine technique that involves burning an herb called Mugwort, to promote healing. Moxibustion has been used throughout Asia for thousands of years. It is debatable which came first, moxibustion or acupuncture? The purpose of moxa is to stimulate the flow of qi and blood and maintain general health.

There are several different ways for the practitioner to administer moxa.  At RiverWest Acupuncture, we typically use one of the three listed here.   How it is administered is usually determined by what symptoms are being treated.

What is Moxa used to treat?

In general terms, practitioners use moxa to warm body regions and acupuncture points along the meridians. The moxa then stimulates circulation and activates a smoother flow of qi and blood, along with stimulating the internal systems (digestive, respiratory, gynecological, etc) and boosting overall immune function.

One way to use Moxa is to turn breach babies by burning moxa on a point on the mother’s little toe.   Like, who figured that out the first time?