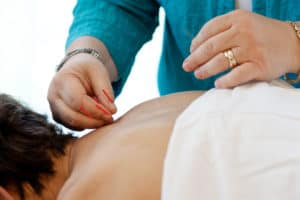 One of the first questions someone will ask me is, “what does acupuncture needles feel like?”  It is a common fear for many people who have never had acupuncture before and that it will hurt. After all, you are being poked with needles! However, most people who take the plunge are pleasantly surprised by the experience. Some patients don’t even feel when the needles are inserted. The reality is when you receive acupuncture, treatment is not supposed to feel excessively sharp.  However, if it does, the acupuncturist can adjust the needle’s position or depth to be more comfortable.

However, while you may not feel much sharpness doesn’t mean you won’t feel other kinds of sensations during the needling process. The experience of tingling or heaviness some patients feel during acupuncture is called de-qi.  It is the moment when needling has activated qi energy movement through the body.

Once de-qi is achieved, sometimes an acupuncturist may utilize other techniques to manipulate and encourage de-qi sensations. Those would include gentle twisting or pulling of the needle in certain directions.  For the most part, de-qi is a good thing that indicates that healing has begun.

So what type of sensations can one expect to experience during de-qi? Some people feel a mild aching. Others feel heaviness or warmth. Some people may even feel a buzzing or rushing feeling. During the process of de-qi when qi energy becomes stirred up, mild reactions like itching, sweating, feeling lightheaded, or even sensations of fullness, cold, or heat also can occur in various places of the body. Sometimes these sensations aren’t even felt close to the needling point and occur instead in other parts of the body that received no needling. The five common sensations felt during de-qi are:

Heavy
Some patients feel a sense of heaviness similar to the feeling of a weight being placed on an area. This feeling of heaviness usually spreads, expanding across the whole body and creating a feeling of calm.

Achy
Sometimes an achy sensation can occur at the needling site. It usually diminishes after a few seconds, however, can occasionally ache slightly throughout the treatment. Though it can be an intense sensation, especially on the hands and feet, it is normal. If this sensation becomes too painful, your acupuncturist can adjust the needle.

Electric or Tingly
Patients sometimes experience an “electric feeling,” as if they have been shocked or zapped. This can occur at the needling point or in an unrelated part of the body. Though not painful, it can be a surprising feeling. Tingly sensations can occur intermittently throughout the body.

Itchiness
Itchiness is occasionally felt at the point of needle insertion but can also occur in other areas of the body as qi moves through the meridian channels of the body.

Warm
Some patients feel a warmth that engulfs the needling point and lasts for a minute or two. This is usually described as a pleasant sensation.

Tell Your Acupuncturist about Sharpness

As mentioned, de-qi should never feel excessively sharp. Occasional sharpness may occur when an acupuncture needle is initially inserted, but the most you should feel is a pencil poke. If you feel sharpness beyond the level of a mild mosquito bite, tell your acupuncturist. Acupuncture should be a comfortable experience.  Your acupuncturist wants you to know about any discomfort felt during treatment.  That way they can adjust the needles as necessary. He or she may try needling the point again, or may simply remove the needle.

So if you’re being held back from receiving acupuncture because of your fear of needles, have no fear. You are far more likely to experience the peculiar, yet oddly pleasant sensations of de-qi to any sharp, stabbing pain you might be expecting. Your Portland acupuncturist is seeking to make your acupuncture comfortable.  You only have to let them know if you are experiencing any sharp pains during the process.