How Acupuncture works for Allergies

Here’s a story about Al. The name is changed to protect our patients identity. This story is about how acupuncture works for allergies.   Al came to RiverWest Acupuncture as a new patient about 18 years ago.  His problem was seasonal allergies that would get so bad, it would induce asthma.   His MD would prescribe allergy medications and he had an inhaler for his asthma.

Al wasn’t happy with these solutions.   First, they didn’t address the root cause of the allergy.  So Al could look forward to having the same problem the rest of his life.   And, as he used the allergy meds, they would make him feel drowsy, fatigued, lethargic, and like his head was full of cotton.   Al was working full time, and going to school evenings to finish his degree, thus trying to manage those symptoms made his life torturous.

In addition to dealing with these symptoms, Al happened to love fine wine. The meds that he would take to help the allergy symptoms, specifically prohibited drinking alcohol of any kind.

How acupuncture works for allergies

I started with alleviating his current symptoms.   It was the spring, and his allergies were making him completely miserable.  He couldn’t sleep. The Acupuncture treatments began to eliminate his reaction to allergens almost immediately and strengthen his immune response.

Herbs: Another Tool of Chinese Medicine 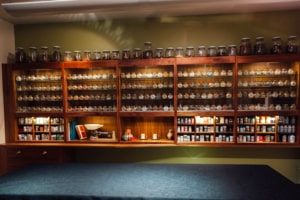 I also gave Al Chinese Herbs that reduce inflammation in his nasal passages, thus he could breathe.   They were effective in drying up his sinus, which in turn got rid of his post-nasal drip.   This was a big cause of his not being able to sleep, so he finally was able to rest. These symptoms were considered the branch of the disease, and had to be dealt with first.

The Chinese Herbs also helped strengthen his lungs, because in Chinese Medicine most organs have a particular sensory organ through which they open.   For example, in this case, the lungs open to the nose.  There is a correlation, so whatever happens to the lungs, affects the nose.   Allergies affect the nose, because the lung isn’t strong enough to cope with various particulates in the air. The branch symptoms are present in the nose, but it’s really the lung you want to strengthen, since it’s the root.

That’s why we look at the whole body in Chinese medicine.  It’s the relationship between the organs and the body, and how they interact with the pathogenic factor, the allergen itself.   The beauty of acupuncture is that it addresses wherever the imbalance may be.

During his first season of treatment, our strategy was focused more on the branch–the problematic symptoms–and this allowed him to get through the season comfortably, without medication or his inhaler.  Once we accomplished our first goal, then we honed in on the root cause of the allergies, and how could we manage it going forward.   We started with monthly treatments that would continue to boost and recalibrate Al’s immune system by tonifying his lungs.   Part of the problem with allergies is that the body sees things like pollen, dander, food, etc. as enemies to the body.   Our immune system gets a bit confused and believes these things are to be attacked, even if they’re basically harmless.   How do we change that?  With acupuncture and herbs!

Over the past years, Al has comes in quarterly to keep his system strong and aligned.   Usually the months prior to allergy season, he will come in weekly to really beef himself up.  And he picks up a bag of herbs to strengthen his lungs, so they no longer perceive allergens as something to respond to so dramatically and uncomfortably.

One of the things that I watch each year as Al comes in close to allergy season is how much stress he is under. What he has been exposed to, i.e. everyone in his office has been sick, how much sleep he is getting, how much sugar he’s been eating.   Each of these components affects how his body is going to respond to treatment. . But whatever the situation, there’s an herbal formula and specific acupuncture points to keep him on track.

Al has not used an inhaler in 17 years. Allergies are not an issue for him, which is why he sticks to our strategy over the years.