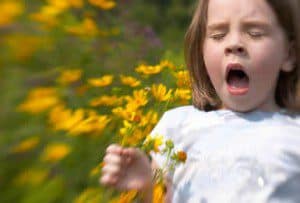 With all of the trees and flowers in full bloom, many people are currently suffering from seasonal allergies. Running nose, sneezing, and watery, itchy eyes can all detract from enjoying the beautiful weather. Approximately 58 million Americans experience some symptoms of seasonal allergies during the spring and summer seasons.  Some of those people wonder, “Can acupuncture treat allergies?”  Many other people turn to antihistamines to provide relief.   That decision results in millions of dollars being spent on anti-allergy medications and allergy shots every year. However, some patients reject the antihistamine strategy.  They find alternative treatments like acupuncture become a way of treating and subduing seasonal allergies.

Western medicine describes seasonal allergies as being caused by the immune system hyperactively reacting to the presence of pollen.  It attacks the particles as it would bacteria or a virus.  Many of the immune system’s lymphocytes that interact with the pollen particles are located in the gastrointestinal tract, spleen, lymph nodes, bone marrow, as well as within the bloodstream. Coincidentally, acupuncture often utilizes the Spleen, Stomach, and Large Intestine meridians for treatment.  This may account for potential positive effects on seasonal allergies symptoms. For treating allergies, patients generally receive an initial series of treatments, and further booster treatments as needed.

Results from the Study

Some still question the report

Still, regardless of some evidence that a placebo effect was occurring amongst participants, the results of the study still suggest that acupuncture might help to alleviate some symptoms on seasonal allergies. At any rate, the 2013 study opens up the possibility and consideration of further investigation in the matter. Acupuncture can help patients feel better by being paired with traditional Western methods or by providing a safe alternative for patients who otherwise experience no relief or undesirable side effects from conventional Western medication. For those who want to answer the question, can acupuncture treat allergies, can do it themselves.  They can track of their symptoms before and after treatments, recording their number of sneezes per day or bouts of itchy, watery eyes. Future studies someday may better illuminate whether acupuncture can definitively alleviate symptoms of seasonal allergies.

So if you are interested in treating seasonal allergies with acupuncture, speak with a professional at RiverWest. Patients can ask the acupuncturists about their past success rates and experiences and in treating allergy symptoms. RiverWest Acupuncture in Portland, OR can help you better enjoy the beautiful spring weather and flora.
To read more about this study, click here.