Acupuncture and the NFL: How Acupuncture is Helping to Treat Sports-Related Injuries 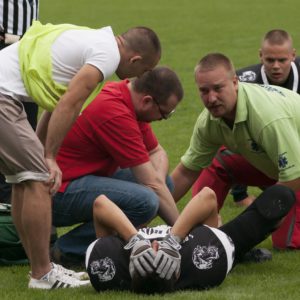 The Super Bowl game last weekend marked the end of football season, and some of you might still be stinging from that Seahawks loss. But did you know that even NFL players use

In 2010, both ESPN and Business Insider covered the story of an acupuncturist by the name of Lisa Ripi.  Lisa treats over forty different professional football players from teams like the Jets, Giants, Steelers, and Dolphins. The articles covered Ripi’s habit of devoting one day a week to each city.  And how in Pittsburgh, at least ten of the players would hold a “spa night.” At which time, they would receive acupuncture treatments for their aches and pains. In 2011, when New York Jets fullback Tony Richardson received a pair of bruised ribs right before playoffs. Richardson did not turn to the traditional methods most other players have relied on. Instead, he turned to Ripi and acupuncture to help him heal.

NFL Players are turning to acupuncture

Ripi’s work in treating NFL members, and the growing number of players who are turning to acupuncture treatment, are changing the way we perceive the relationship of acupuncture for sports injuries. With American football being perceived as a male-dominated field, the industry has previously shied away from acupuncture.  They labeled it as either too effeminate or a “placebo treatment.” Even in recent articles written this year, writers are still describing NFL players receiving acupuncture treatments as “surprising.”

Still, their is an increasing number of NFL players that are turning to acupuncture.  Which in turn, demonstrates a more positive attitude towards acupuncture treatment than in the past.  In addition, it illuminates the growing confidence towards its efficacy in treating pain.  Quarterback Aaron Rodgers has openly thanked his acupuncturist during press conferences for keeping him in shape during the 2014-15 season. And for some players, like James Harrison of the Cincinnati Bengals, acupuncture has become almost a humorous way of showcasing masculinity.  Done by players making friendly challenges on who can take the most acupuncture needles.

Techniques based on player position

When Ripi treats the aches and pains of her NFL clients, she focuses on their sore areas.  Then she uses the needles to increase blood flow. Players who play different positions during the game, tend to receive injuries and pains in different areas of their bodies. Therefore, Ripi will focus on different areas of the body based on what kind of player she is treating.  This allows the best healing and relief to be achieved for each player. Often acupuncture is coupled with other more traditional treatment, such as icing and stretching. These protocols help players treat sores and strains.  However, more athletes are turning to acupuncture to treat other types of ailments. They  include musculoskeletal imbalances, muscle tightness, and even depression.

The realm of sports and the NFL have become more inclusive of acupuncture treatments.  And it just goes to show how effective acupuncture can be in treating sports-related injuries and that treatment can be for anyone. In the Pacific Northwest, we are known for our active lifestyles, especially when it comes to the outdoors.

In the city of Portland, there are plenty of enthusiasts of such hobbies as bouldering, hiking, kayaking, and of course, bicycling. However, though these hobbies can be incredibly exhilarating and great for cardio, there is always the risk of physical injury when partaking in any strenuous physical activity. If it so happens that you sustain a sports-related injury during one of the many outdoor activities that Portland has to offer, know that acupuncture might be a great way to treat that injury.  Contact your acupuncturist to provide you with the treatment necessary to keep your body active and in play.